Delving into the overlooked world of horses in media and video games.

Ranch of the Rainbow

So that's where Dorothy's horse of a different color came from.

Posted by talkingMongo0se at 10:55 PM 0 comments

New fun little poll letting people rate various Disney equines for numerous categories.  Such as goofiest, strongest, cutest, sassiest ect.  They also have 'most purebred' as a category.  Unless we have a pedigree for a non existent equine, I'm not exactly sure how that one works...

But is is fun.  They're also including Pegasus, the toy horse Bullseye, and even the adorable seahorse Sheldon.  Because every horse person knows seahorses are honorary horses.  And the closest thing to a mythical hippocampus we'll ever get.  (Unless we create a college for hippos.  But that doesn't really count.)
Posted by talkingMongo0se at 11:34 PM 0 comments

So Ralph Lauren sent a sample of their fragrance in the mail last year with this image on it. 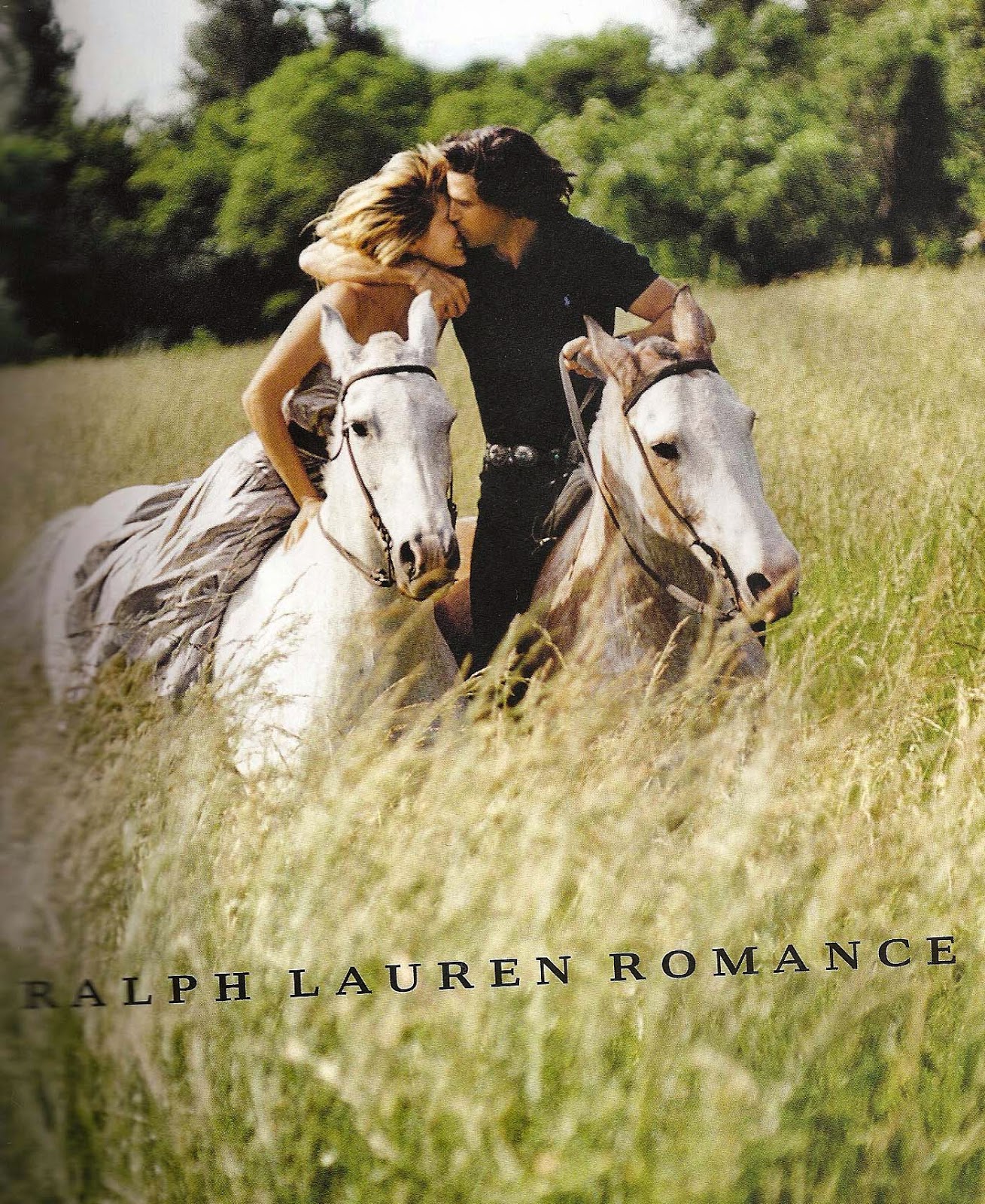 Ok, cute.  A couple in love kissing on horseback.  A classic fairytale romance scene being used to market things towards women who were raised on Disney. 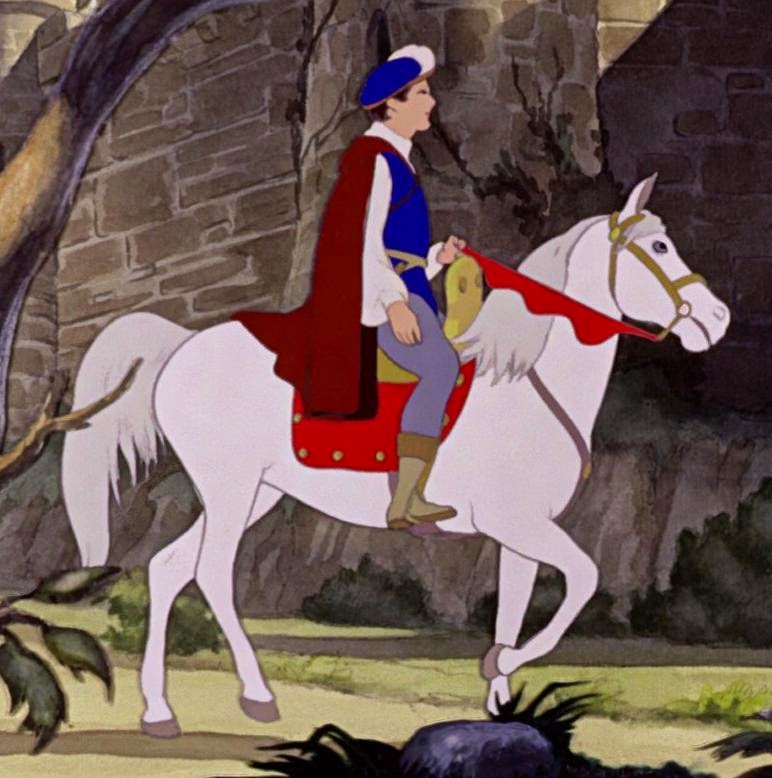 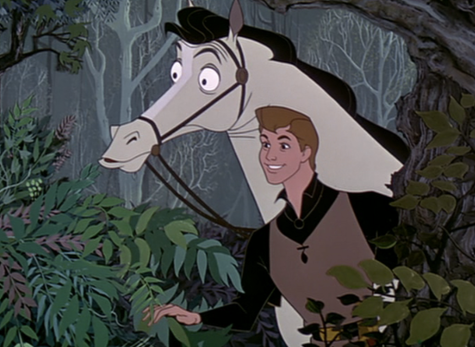 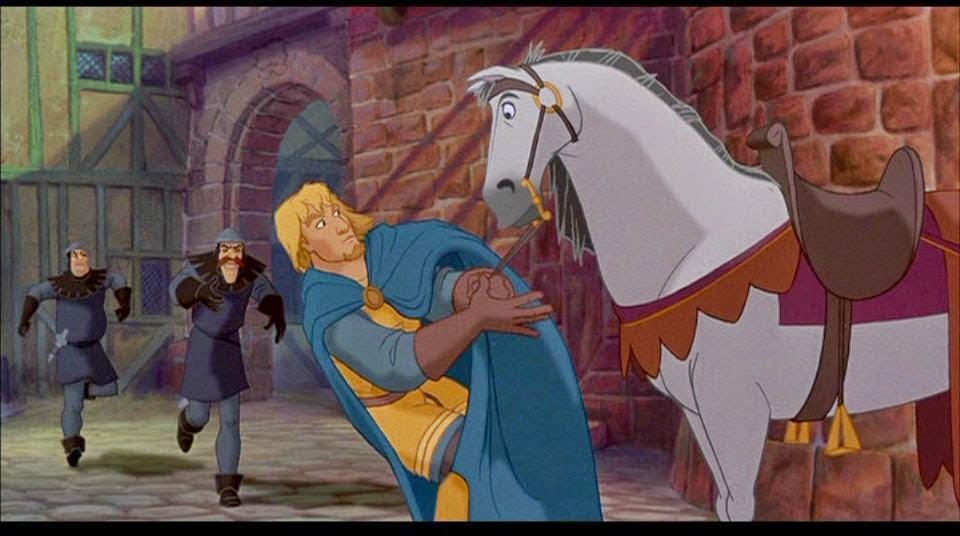 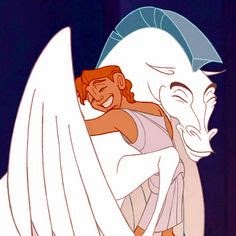 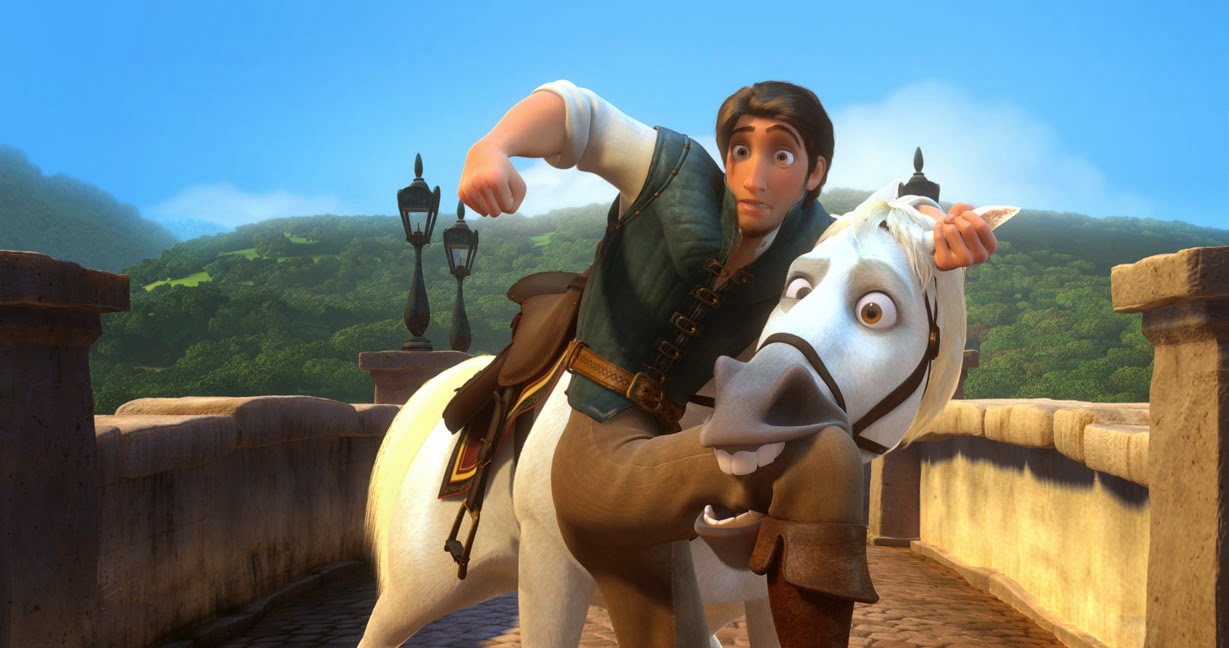 ...here?
And I don't just mean the horses. :badum-ching!:
^I also just realized this illustrates the evolution of prince and equine bromance.

But let's look back at this original image.  Something just seemed off.  I was thinking this had to be a pair of models made to look like they're galloping through the grass while making out.  With a saddle hidden under the dress for stability, and a handler on the side Photoshopped out.  They can't possibly be moving.  Look at the tall grass used to hide the perfectly stationary legs!

I'm pretty sure there's an industrial fan somewhere too.

Well.  Unless there are some amazing Adobe After Effects at play, I was wrong.  This was a real photo-shoot for not only a print ad.  But a commercial.  These are models.  Those horses don't have handlers at side.  To bastardize a Matrix quote, "There is no saddle".  And they really are galloping, or at least loping, through that field of grass.  It's honestly refreshing that it wasn't faked like a magazine cover model's proportions.  However, this scene in real life wasn't as graceful or romantic as they want you to believe.

Slow-mo makes everything look better.
I'm pretty sure she may have fallen off after the camera cuts out.

And there are some things you can't un-see. 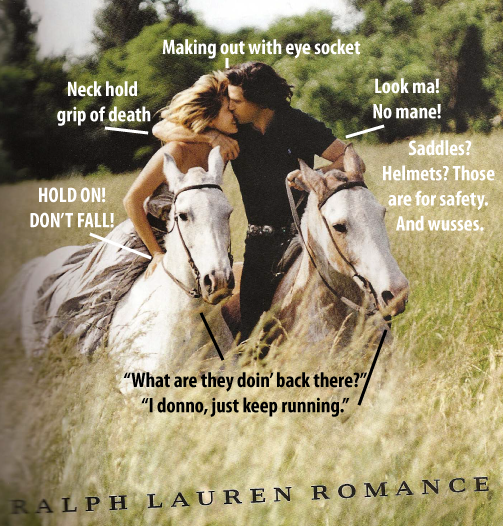 So how should one go about kissing romantically, and a little safer, while on horseback? 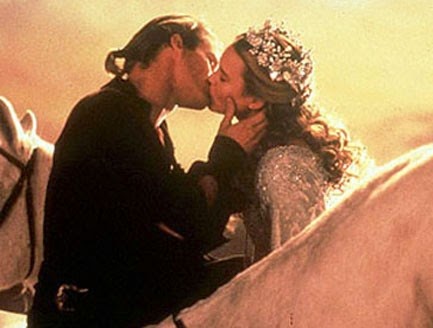 I'll just let Wesley and Buttercup take it from here.

Happy Valentine's Day everybody!
Posted by talkingMongo0se at 4:03 PM 0 comments

As usual I'm late to the celebration, but happy Memorial Day none the less. 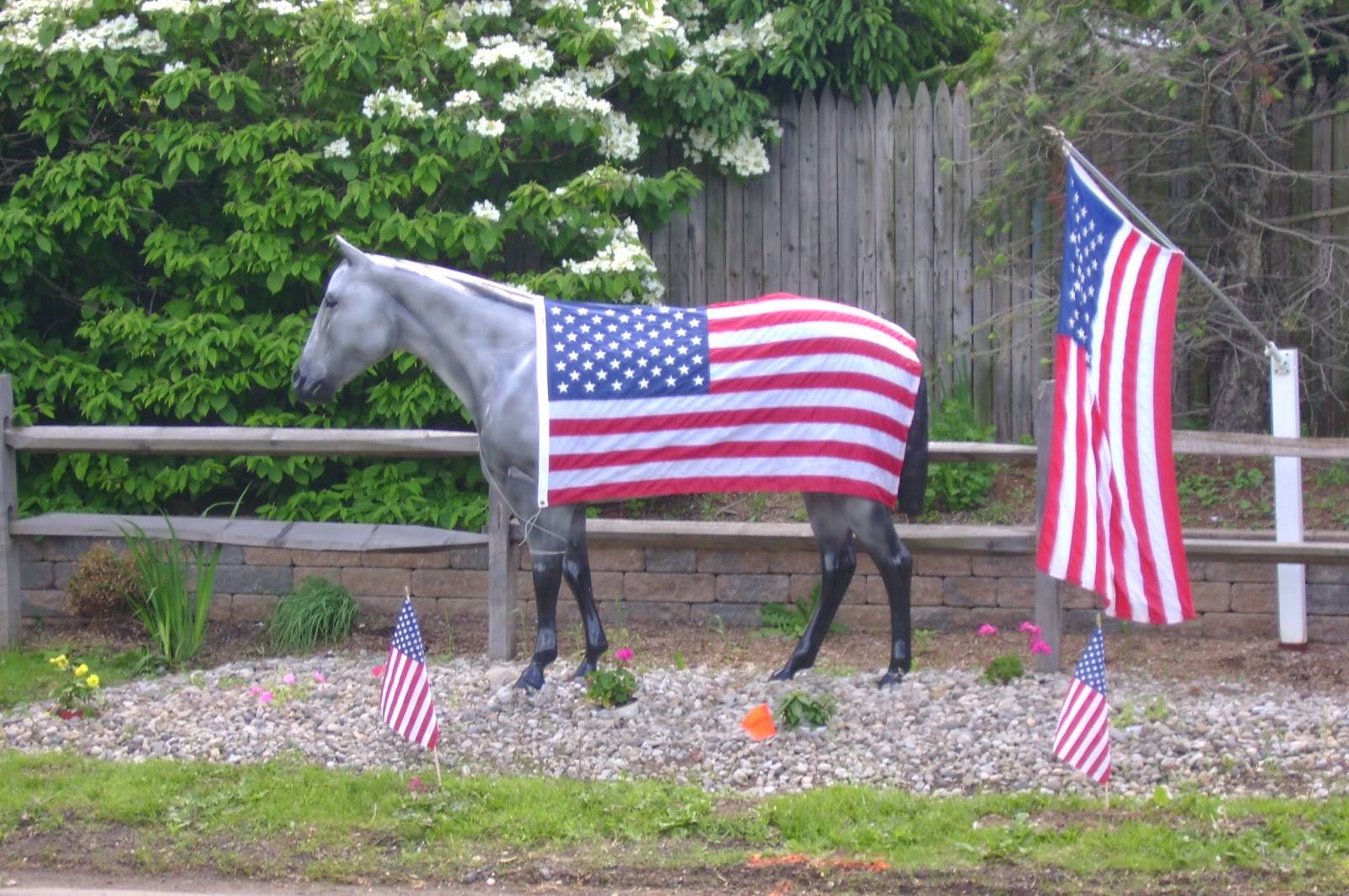 The roadside landscaping horse is decked out in stars and stripes. 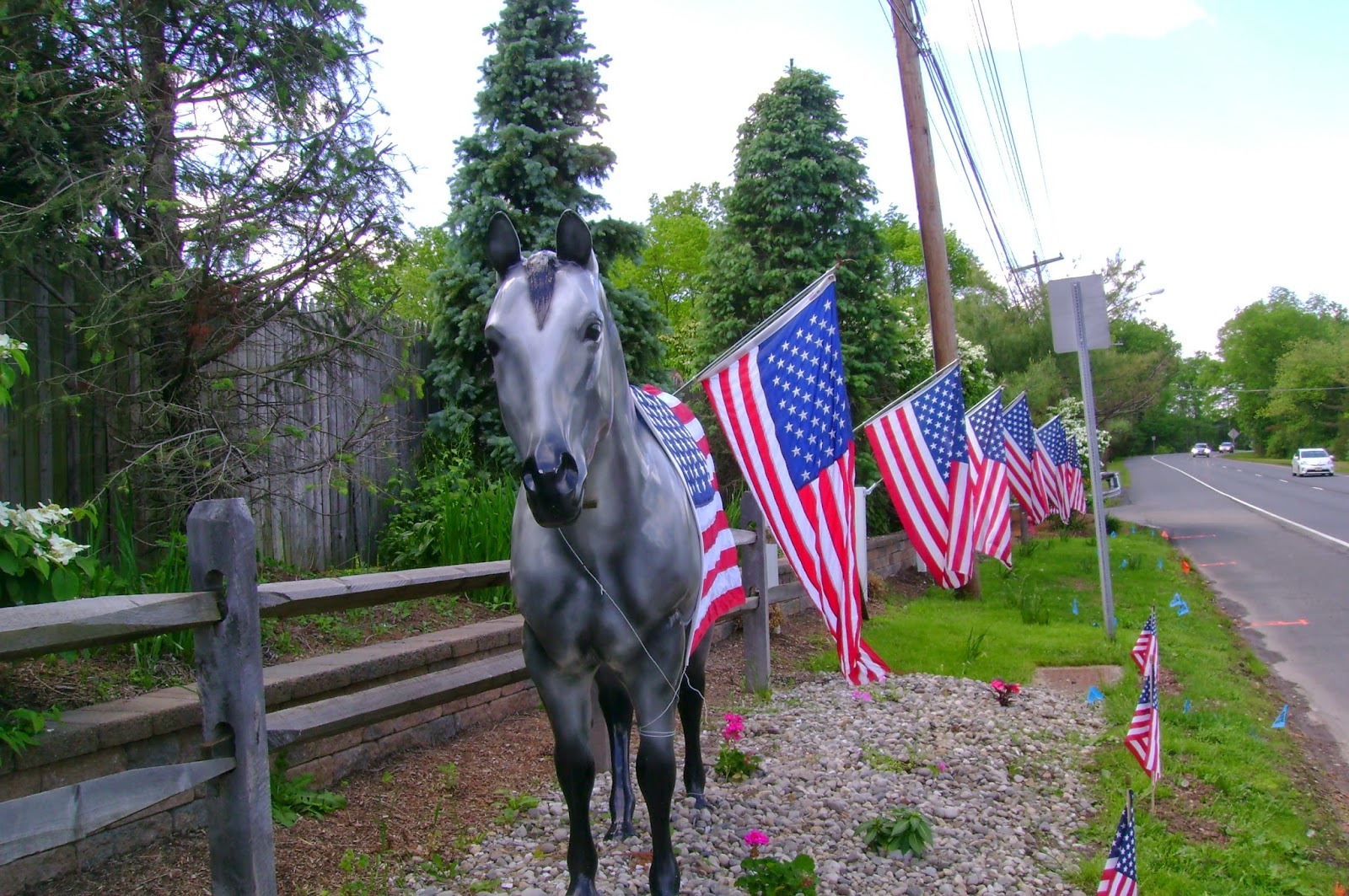 Flags that go on forever. 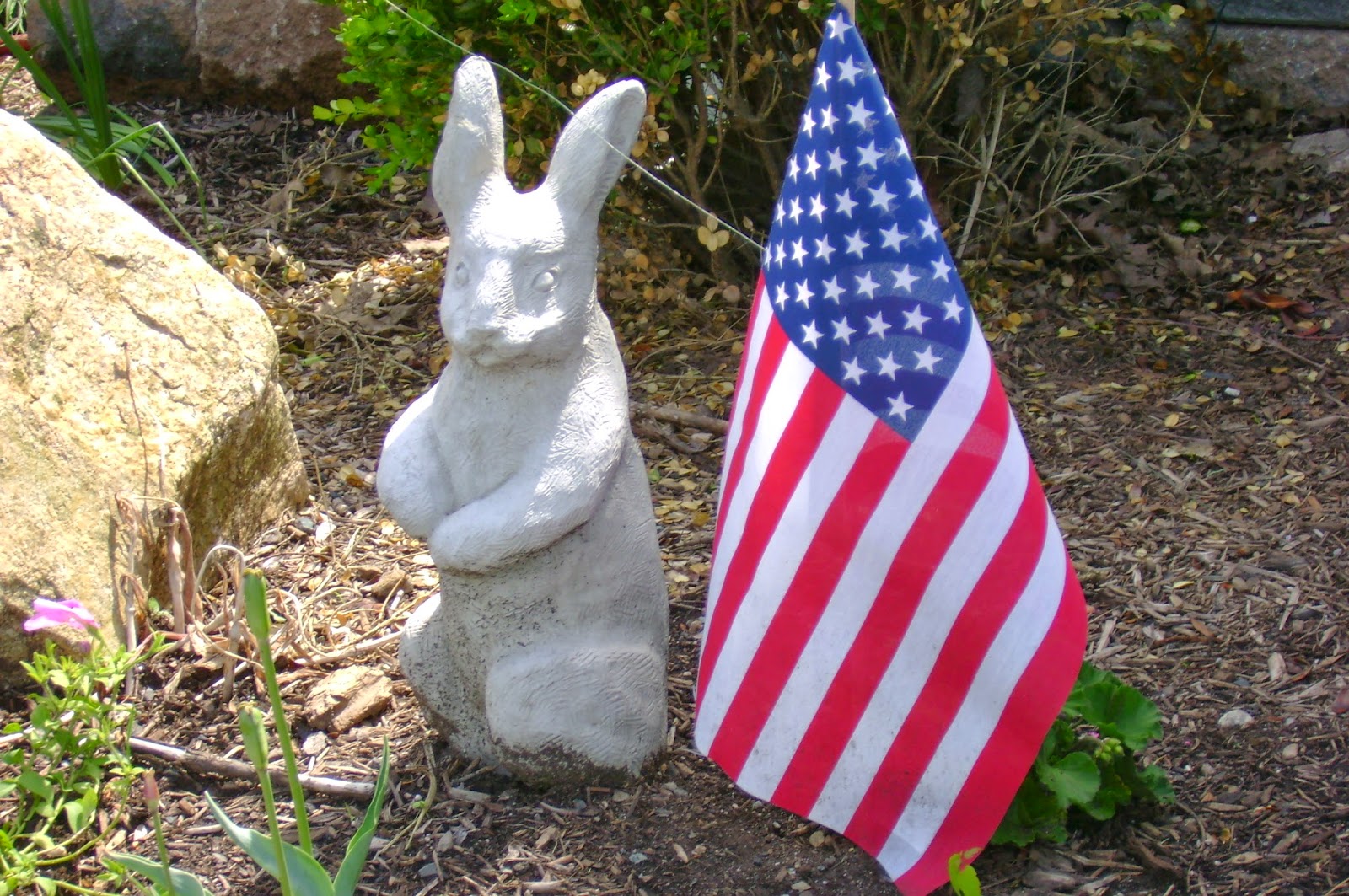 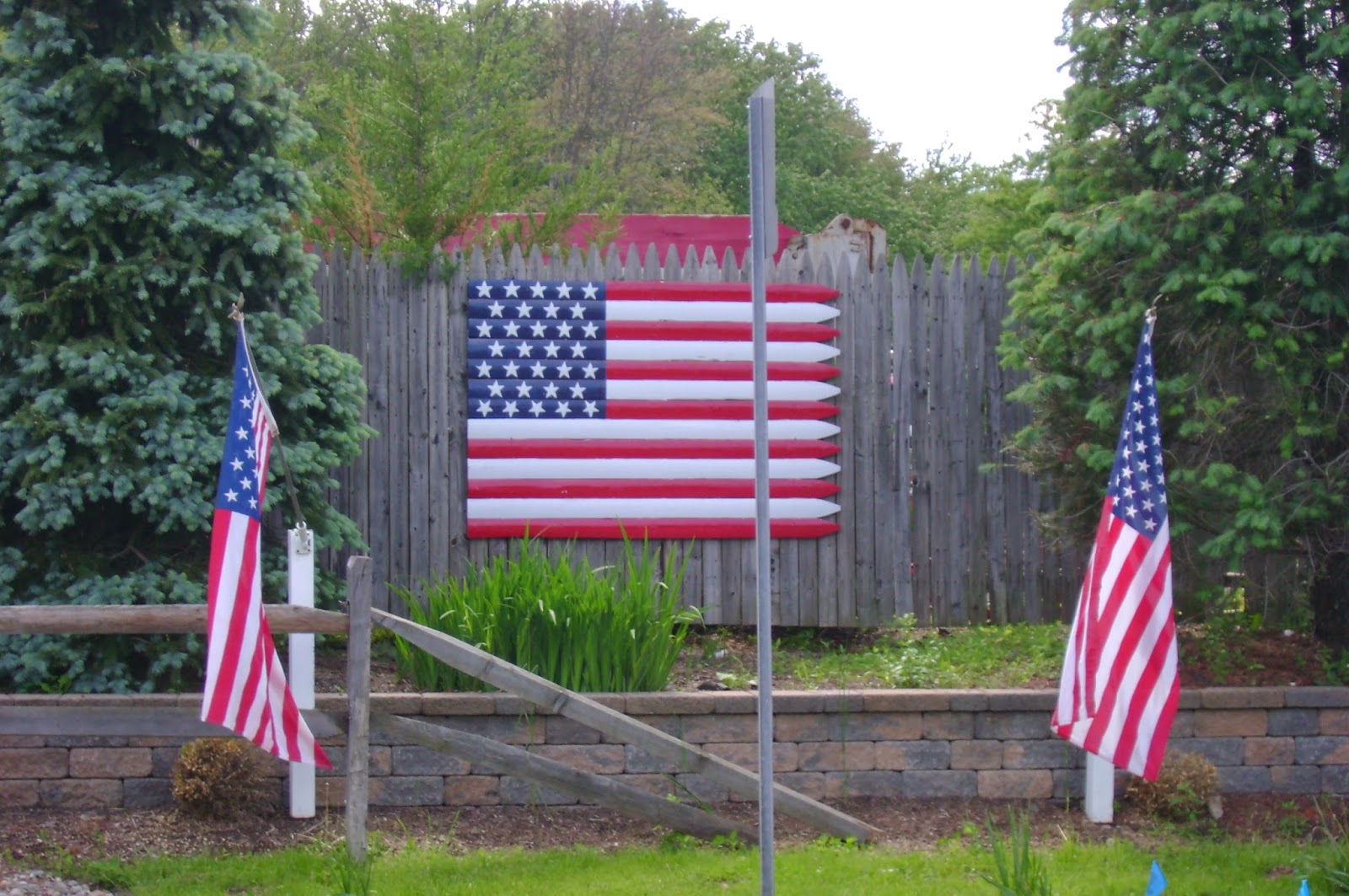 The fence flag is amusing.


Hope you all had fun with your barbeques and pool openings.  Let's hope spring doesn't try to slide back into winter.  Again.

I officially announce winter, wrapped up!

Posted by talkingMongo0se at 6:16 PM 0 comments

Video games.  And a horse creature.  What more excuse is needed for this blog?

Posted by talkingMongo0se at 12:12 AM 0 comments

If you are in the upper hemisphere you might be at home reading this with a cup of coco browsing the internet.  Peacefully relaxing now that the holidays are over.  However winter is still here.  If you're in the east coast of the United States chances are you are panicking over snow.  LOTS of snow.  If you're in Canada you're laughing at us because this is the equivalent of a flurry up there.


We just had winter storm Maximus.  Who apparently was trying to kill us all. 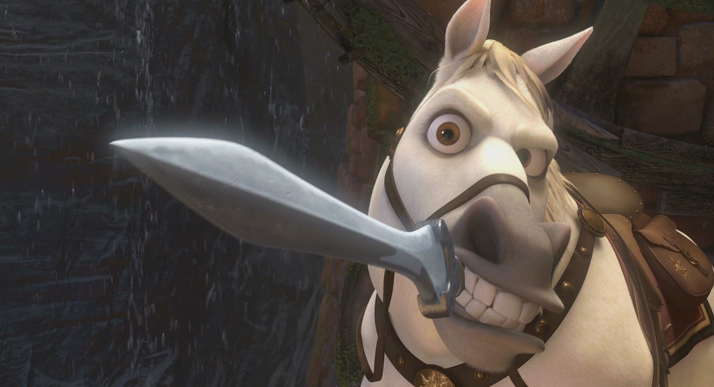 
There is this whole winter vortex thing going on.  This causes cold temps, horses being bundled to the ears, children getting temporarily lost in snow drifts, and dogs learning how to become ground hogs just to make it to their favorite spot in the yard.  (Speaking of ground hogs, they lie about how long winter will be)

Basically the Disney movie Frozen is becoming reality is what we're saying.  Someone needs to give Elsa her glove back.  Maximus is now being followed by winter storm Nika who will throw untold amounts of the fluffy white stuff on top of what we already got. 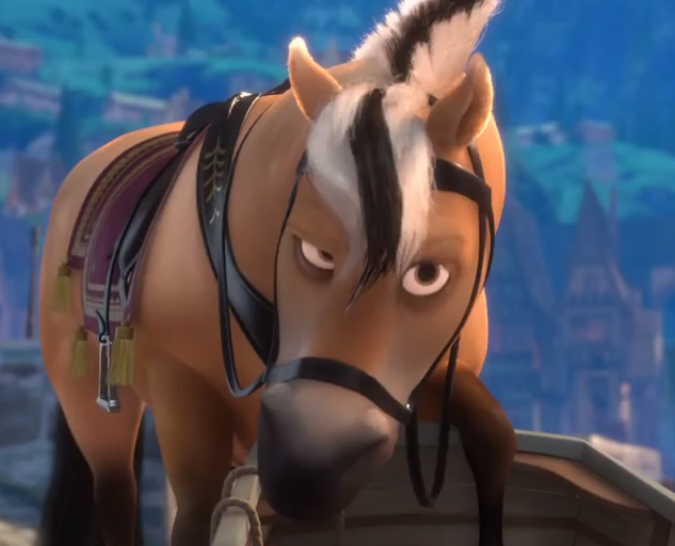 I don't know what this horse's name was in the movie.  It's Nika now.


So if you're up in my neck of the woods, stay indoors, read a book, and here is a family member's recipe for old fashioned winter Panic Toast. 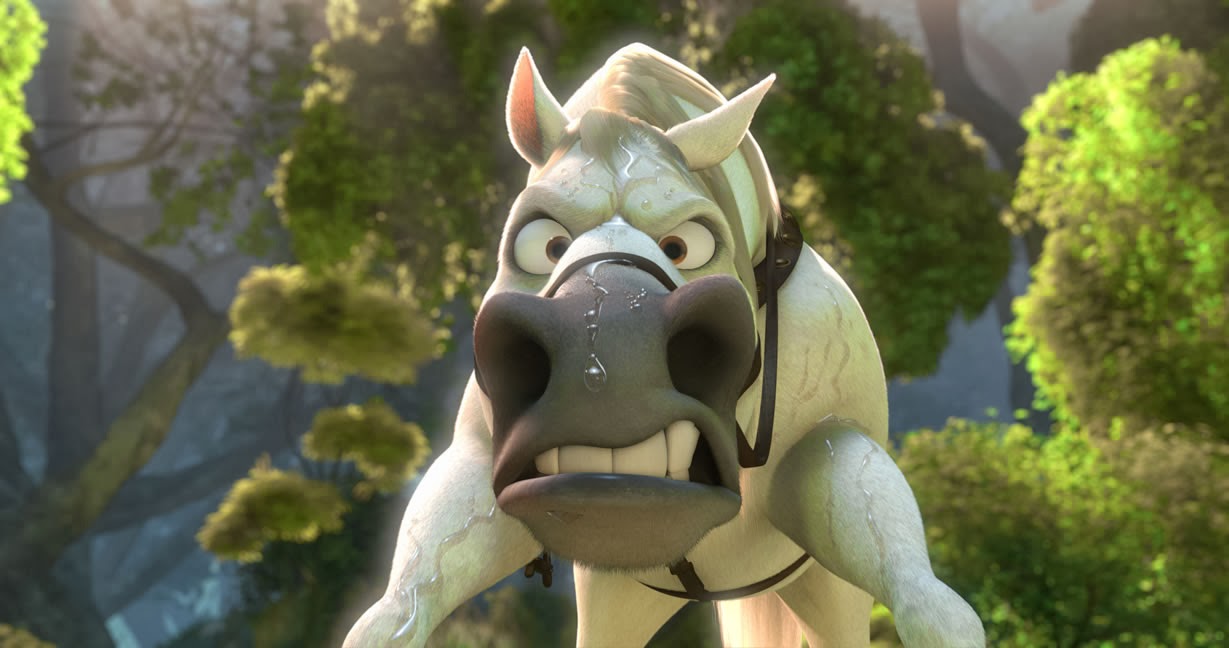 What's worse than all the snow?  The thaw.
Horse people know what I'm talking about.

Whatever you do.  Remember your towel, and DON'T PANIC.

Posted by talkingMongo0se at 8:50 PM 0 comments

I stopped by the Roadside Landscaping horse for the holidays and ran into Peter who owns the landscaping company and decorates the horse.  I need to find time to interview him about the story of the roadside horse when I find time during my busy schedule these days.  XD  Anyway, he showed me the new decorations which were being put up.  I was lucky enough to get images with snow on the ground. 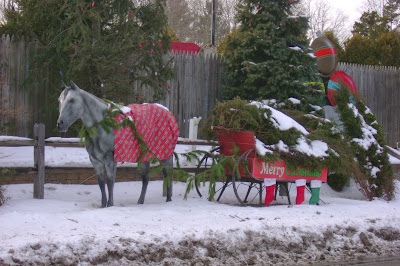 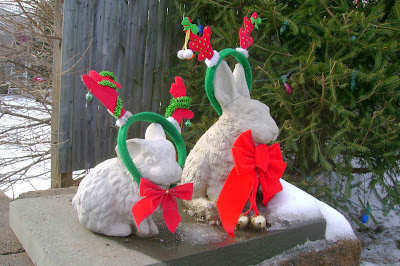 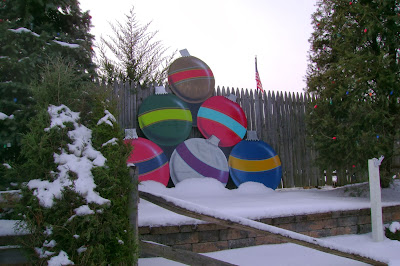 There were lights that weren't put up yet.  So right after New Years I stopped by and got to see everything illuminated.  As you can tell from the sky we were expecting a Nor'Easter.  Their snowplows were all set up and waiting for the storm to arrive.  Bob and Vince were nice enough to light everything up for the photos.  I got to see this on my drive back home in the dark and it looks beautiful!  But too dangerous for me to pull over and take a pic sadly due to a median divider in the way going home. 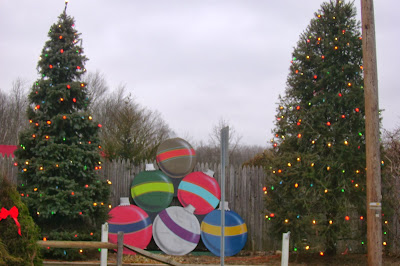 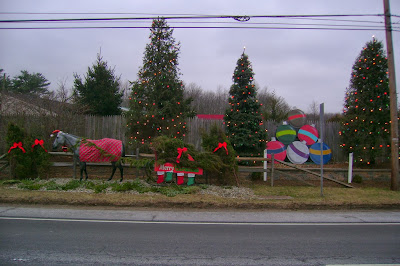 So new year.  And one of my resolutions is to update this blog more.  I have a year overdue update on the Whitey/White Bliss the standardbred colt.  Same with finishing the adventures of the Visible Horse.  XD  So my track record is not the best.  I also have a whole bunch of new horse fossil replicas!  And I plan to flexibly articulate them and document the progress.  Sadly due to the storm we're having in the north east, I'm missing out on a trip to a carousel museum in Connecticut.  Hopefully snow won't get in the way of that next year.   And till then, hopefully more fun being posted here!


Posted by talkingMongo0se at 5:42 PM 0 comments

talkingMongo0se
Video gamer and horse person. Went to college for equine studies and graphic art, strangely computers and ponies complemented each other.